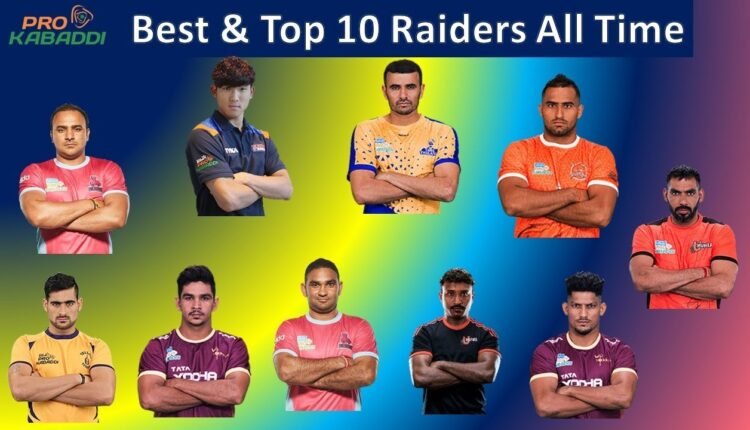 THESE ARE TOP 10 KABADDI PLAYERS ARE:-

He is now retired kabaddi player and he is known as king of bonus across the globe. His Captaincy was also very cool like MS Dhoni in Cricket and Anup Kumar in Kabaddi and India under the reins of him won the 2016 World Cup of Kabaddi.

2. PARDEEP NARWAL. THE GOAT OF KABADDI IN RAIDING.

Pardeep Narwal is the modern great of Kabaddi and has the most number of Points in PKL Season History with over 1500 raid points.

He is the GOAT raider across all raiders of all teams and also known as the dubki King of Kabaddi significantly. His Team is UP Yoddhas.

He is the Poster boy and showman of Indian Kabaddi and his further speedy escaping skills are very eye-catching and mental toughness of him is excellent and this concluding Season of PKL 9 he breached the milestone of 1000 plus points significantly.

He also contributed in the defence department occassionally and show his all-round skills sometimes. [Rahul Chaudhari]. His Team is Jaipur Pink Panthers.

He is the greatest all-rounder and majorly defender of all time in the history of Indian Kabaddi with over 350 tackle points successfully.

His Aggressive nature, inspiring words and defensive technique filled with skill and grit has made him the GOAT of defence unit. He retires from Kabaddi and now serving as an Assistant Coach for Telugu Titans.

He is the world-cup winner raider and Arjuna awardee in Indian Kabaddi History.

He is such a brilliant, solid and skillful raider but he failed the dope test in this season and banned for this season and now serving as a Police Official in the State of Himachal Pradesh.

He is most experienced and productive all-rounder in Pro-Kabaddi is unmatched across all teams. His Raiding and defensive skills in PKL history is so excellent and filled with high intensity and pace. This Season was not upto the mark as per his standards of seasoned all-rounder in PKL history. He played this season for Bengal Warriors team as an all-rounder.

He is the most energetic and spectacular all-rounder in PKL history.

He Played for Several times but any player cannot match his energy, speed, stamina, endurance and agility in PKL History time to time. His points does not tell his real story, besides and beyond his numbers, the most important thing that he is such an utility and amazing player for any team.

He now plays as a replacement for injured Kabaddi Player for UP Yoddhas Team.

He is a productive defender and provide solidity to team by his defence.

Furthermore His solid defence in right corner Became U Mumba team to Defending Champions and now he plays as a substituted player for Bengal Warriors Team and in briefly He was an important member of PKL Team [Haryana Steelers].

Finally, 10th is Him and he is the most experienced Iranian defender and now the most successful defender across teams with most tackle points surpassing Manjeet Chillar in PKL history and most important thing that He has led to his new team Puneri Paltan to the final and part of teams that became the PKL Champions in PKL history effectively and efficiently.

Therefore, these are top 10 Kabaddi Players.