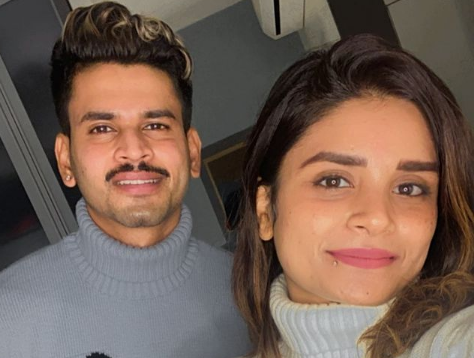 Shreyas Iyer Girlfriend Bio, Family Detail, Girlfriend Early Days, Cricket is one of the talented player India has ever produced. When he comes out to bat the Opposition fear. Because he can speed up his game, take it from the top-notch.

With an Million of people playing at Shivaji Park Gymkhana in Mumbai. In the institution Hub of cricket, Vin Amre observed a young and talented boy, not even in his teens. Timing strokes off the front foot and the back foot against pacers twice his height. He attracted attention right away and nailed the cover drives and pulls with equal scorn. Pravin Amre’s keen eye then polished this raw and obvious potential.

Shreyas Iyer Father is a businessperson and in an interview he said he realise his son he will be a potential cricketer when he was 4 years old.

Shreyas, however, lost his form while playing for the U-16 team. It worried his father since he thought his son had either found love or associated with the wrong crowd. A psychologist whom Santosh brought Shreyas to affirmed that there was nothing wrong with him. He was simply going through a difficult time like every other player.

Shreya’s Mother said in an interview with Delhi Capitals that he always believe his son that he got talents and he will become a cricketer.

However, when he was playing under16 Iyer got a Rough patch. His father suggests not to play cricket while his mother gave him the confidence and to fight back.

His sister is very much close to him and he also gave much confidence to Shreyas so that he can deliver at big stage.

He is not dating anyone right now, and he always keeps things in private. While his close friend Nikita Shiv is very close to Iyer. she is a business entrepreneur.

In ODI, Iyer is very much different if India loses a few wickets he carries out from there and hit a century nowadays. In 39 matches and 35 innings, he scored 1537 runs with a highest score of 113 not out and hit 2 centuries and 14 fifties.

This are one of the top detail of shreyas Iyer and he is one of the tealented batsman india have verver produced.

Most Dangerous batsman In the world 2022