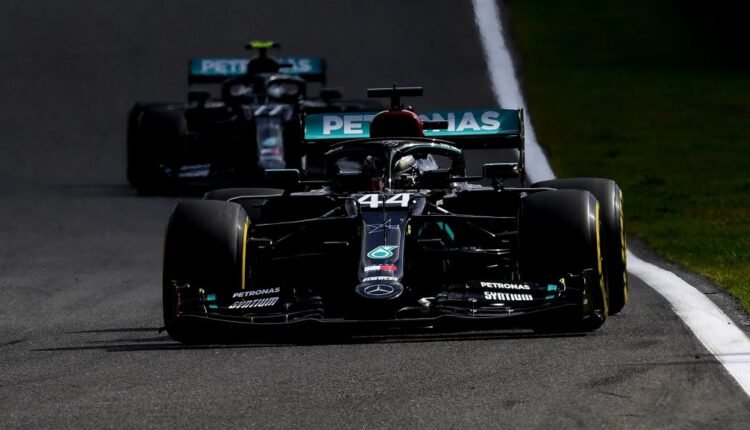 Mercedes drivers are speculative about their chances at the upcoming Sao Paulo Grand Prix in Brazil after some improved performances in the last 2 races.

Mercedes’ W13 found some improved performance thanks to new parts fitted in it. This led to Lewis Hamilton securing P2 in both Austin and Mexico City. Thanks to this, the silver arrows are well in contention of a pole in Interlagos.

The main challenge will still be Red bull for Mercedes in Brazil. W13 still seems off the pace as compared to RB18.

Lewis Hamilton has won the Brazilian GP on 3 occasions and has an affinity with the track. The 7-time world champion was recently also awarded honorary citizenship of Brazil.

This further adds to the mindset that Lewis Hamilton will be coming in with to secure his first win this season.

Nevertheless, how do Mercedes driver themselves rate their chances this weekend in Brazil?

Lewis Hamilton has his share of experience driving in Interlagos. Now, the 3-time Brazilian GP winner was asked to assess his team’s chances and what he expects. To this Hamilton said:

“Well, I don’t think this circuit and the next one [Yas Marina in Abu Dhabi] is going to suit our car like it did in the last race.

“I’m hoping I’m wrong, I’m hoping the engineers are wrong and I’m hoping the car is a lot better than we expect. I’m going in with that positivity, rather than it’s not going to be the easiest of weekends.”

The race is also important for the team from the championship’s point of view. Mercedes is 40 points off Ferrari for P2 on the Constructors’ standings as they come in Brazil.

Russell gave Ferrari as a major reason for their performance in the last 2 races and believes the Scuderia to be the “key” for this race too:

“I think the key [factor] is Ferrari. They are a bit more of an unknown at the moment; their performance seems a bit inconsistent. Mexico was a really bizarre weekend, how far off the pace they were.

“For sure, you can be confident that Red Bull will have a strong package and be the team to beat. For us, we’ll just try and do our best and be ready to adapt to whatever the weather throws at us and go from there.”

Click here to know how and where you can watch the Sao Paulo/ Brazilian Grand Prix live along with the timings of the events.

Lewis Hamilton was officially named an honorary citizen of Brazil