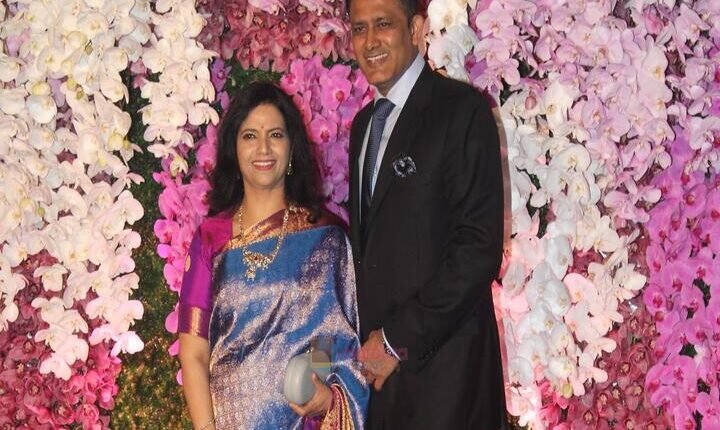 Anil Kumble’s wife Chethana Ramatheertha also known as Chethana Kumble after marriage was born on 18th July 1968 And 54 Years Old. Her Husband Anil Kumble is the leading wicket taker of India with 619 Wickets and is the former Indian Captain.

His date of Marriage is 1st July 1999 when they live happily ever after. His Husband [Anil Kumble] was the former head coach of Indian Cricket Team. Anil Kumble’s Contribution towards the Indian Cricket is solid and memorable and his wife played a massive role in the shaping his carrer to future heights in a robust and credible manner or way. He is fastest leg spinner in the history of Indian Cricket and has a famous record of picking all 10 Wickets against Pakistan in 2nd Innings of Test Match held in Feroz shah Kotla [Now Arun Jaitely Cricket Stadium].

He represented in 271 ODI’S for India in International Cricket and picked up 337 Wickets. In IPL he played 42 Matches and picked up 45 Wickets For RCB [Royal Challengers Bangalore] the head coach role of Punjab Kings, RCB and Mumbai Indians respectively. Anil Kumble’s personality is so calm, cool and composed and he is mechanical engineer in his own right.

Finally, his wife and him have three children, named Aaruni Kumble the couple have adopted her after they won the legal custody of her from the Previous left out husband significantly and their real children are:- Mayas Kumble and Svasti Kumble.

Chethana Ramatheertha has a postgraduate degree in English Literature from the Mysuru College in Karnataka. She used to work at a travel agency named Trans-Oceans Travels, where she first met Anil Kumble. However, post her marriage to the former Indian cricketer, she turned into a full-time homemaker. She is not Active in Social Media and Digital Platform. She won the legal case against his former husband in 1998 and married to him in the year 1999. Her Father’s name is Hosur Nanjappaiah Ramatheertha.

The age difference between the former Indian cricketer-cum-coach and his wife is 4 Years elder as her birth year has the difference of 4 Years. Anil Kumble’s wife gave birth to two more children — a son and a daughter — after her marriage to the ex-leg-spin bowler. They are now a happy family of 5 and are going strong with each passing day. Therefore these are the details of Anil Kumble [The Greatest Indian Leg Spinner India has ever Produced] and his wife Chethana Ramatheertha whom is so caring, lovable and supportive manner to unite and care for his husband and whole family members like his father and mother in a comprehensive significant, credible, reasonable, fruitful and solid fashion.