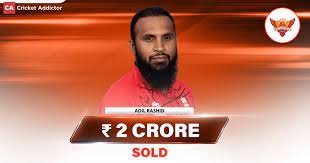 In IPL Auction 2023 Adil Rashid [England’s Premier Leg Spinner in white-ball format has come from the nation of Pakistan and brought up in England] bought by Sunrisers Hyderabad [SRH Team] franchise only in his base price which is 2 Crore Rs. Sunrisers Hyderabad spent in IPL Auction 2023 of 35.70 Crore Rs and their purse remaining of 6.55 Crore Rs after the conclusion of IPL Auction 2023 respectively and reasonably. Their Auction has gone superb and exceedingly well according to buying of Players as required like:- Harry Brook, Heinrich Klassen, Akeal Hosein, Mayank Markande, Upendra Yadav, Adil Rashid etc, and fixing their team combination concretely to shape up the solid and fine squad after the Auction of IPL 2023. He is available for Whole IPL 2023 according to the BCCI that all Australian and English Players available in IPL 2023.

He also bought by Punjab Kings in IPL Auction 2021 at a base price of 1.50 Crore Rs and he played only 1 game in this season of IPL for Punjab Kings against Rajasthan Royals on 21st September 2021 where his spell was very expensive conceded 35 Runs in 3 Overs without any wicket. After this match he never turned up in IPL 2022 because no team has picked him in IPL 2022 Auction.

ADIL RASHID RECENT BOWLING SPELLS IN T20 WC 2022 THAT INCREASED HIS AURA AS A ENGLAND’S LEG SPINNER BOWLER AND BOUND BY SRH TO BOUGHT HIM IN IPL 2023 AUCTION.

He auctioned and picked up by Sunrisers Hyderabad Team [SRH Franchise] because of his massive and valuable contribution in recently concluded ICC Men’s T20 Cricket World Cup 2022 with his right-arm leg spinner, he bowled a maiden-over and tight overs also had taken 4 wickets with an outstanding economy of 6.12 that squeezed their opposition teams and their main players across the whole tournament especially in Semi-Final against India in Adelaide Oval where he delivered an impeccable bowling performance and terrific spell with economical bowling of about 5 Runs Per Over, priced out the big wicket of incredible and solid in-form batter across ICC Men’s World Cup 2022 tourney and second most runs scorer in ICC T20 WC 2022 was SuryaKumar Yadav and restricted the Indian Batters to score quickly also kept a lid in scoring rate significantly.

ADIL RASHID DETAILS ABOUT WORLD CUP 2022 BOWLING PERFORMANCES AND HIS ROLE IN IPL 2023 FOR SRH.

Which moved in a further procedure that the comfortable,easy and fastest victory of England by 10 Wickets and advanced to the final of T20 WC 2022. In final against Pakistan at historic ground of MCG [ Melbourne Cricket Ground] he delivered a match and tournament winning spell in addition to his solid and credible bowling spell from his variations like:- Googly and Leg-Spin got the huge wickets of Pakistan Captain and their main batter Babar Azam and Hard Hitting Youngster Mohammed Haris with an excellent economy of 5.5. Which has helped restricting Pakistan and crumbled them to a paltry score and because of Ben Stokes gritty, hard-fought knock in final, England were the defending champions of ICC T20 WC 2022 after 2010 in an effective, astounding and fruitful fashion substantially and comprehensive professionally way. Adil Rashid is one of the greatest leg spinners in global cricketing world.

Therefore, he now as a SRH player will play crucial and considerable role in middle overs with the ball from his variations like:- Googly, Leg Spin etc, and handy with the bat as well in IPL 2023. Therefore, Adil Rashid Bought by SRH Team and Franchise in his base price of 2 Crore Rs.

Manish Pandey IPL has been sold for DC for Rs 2.40 crore